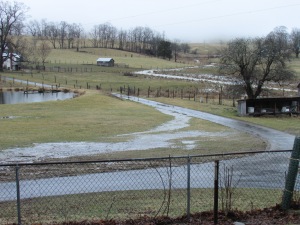 Yesterday and Saturday the rains were pouring down and the fields were saturated and overflowing.

Today it’s almost back to normal.

Thursday morning the timber was frozen and the ground was covered with ice.

The next day it’s totally different!

We are having a whirlwind spring or end of winter and we don’t know from one day to the next what the temperature will be.  Last night we were experiencing 35-60 mile per hour wind gusts.  Thankfully there was no damage to anything that we have found.  We deal with this while waiting on baby calves to be born!!  Farming is a challenge, especially beginning this year.

This heifer delivered her new babe on one of the worst days of the rain and cold winds.

This little black-white faced bull is a survivor!!

We’re not especially covered up with farm work at the moment due to the very wet weather and cold winds.  As most farms are this time of year, we normally would be working on fences, cutting next years firewood, trimming damaged trees and pruning fruit trees.    All of that work is not being completed now because we can’t get anywhere on the farm for the mud.  It’s so easy to get hung up even feeding the cattle.  When I go to the henhouse in the afternoon I wear my knee top rubber boots and the mud is so slimy and thick that it tries to suck my boots off.  The ducks have issues getting to and from their water sources and the chickens stay close to the henhouse because their feet get caked with mud!  We’ve had record rainfall and this week is loaded with more rain, ice and snow.  We’re very anxious about this due to 14 heifers (cow that hasn’t had a calf) due to deliver beginning today. 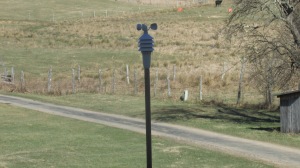 This is our outdoor weather station that I got hubby for his birthday. 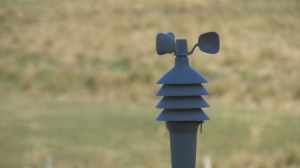 We named him Robin Reed after our local weather forecaster.

Our pond had about a two inches of ice on it and now there’s patches of snow on top of the ice.

My wood pile is disappearing and I’m the only one using it! 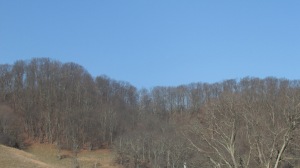 Hubby’s new weather station. It’s been used more than any he’s ever had.

Yes, it’s wintertime and it’s supposed to be cold but darn it we just got teased really bad with 50 and 60 degree weather and my body is just not liking this one bit!  I can stand the cold if there’s sunshine to go along with it but that wind is wicked!!  My son thinks I’m a wimp but one of these days he’ll understand where I’m coming from. Right, Shawn???

I know I have to stick it out for at least three or four more months so I guess I’ll be quilting, crocheting, reading, cooking, embroidering, and blogging a lot to keep me occupied for a while.  I’ll be making hourly trips to the henhouse for eggs and taking them warm water.  I’ll be checking in on Roscoe three or four times a day and making sure he’s okay with just his fur coat and watching to make sure hubby’s hounds will have plenty of protein for food and hay in their boxes for warmth.  We have their houses facing the morning sun to keep them warm as well.  Mother Nature will take care of everything else.

Now, to find my seed catalogs and make a list!!!

I know that spring is just around the corner because I found these in my yard yesterday.

Aren’t they beautiful??  Spring is coming in like a lion and I have two little orphans because of it.  George and Prissy were born on March 15th& 16th consecutively.  It’s was the worse days we’ve had all winter.  George’s mom decided he should be born and baptized at the same time so she had him in a wet weather spring in the middle of a blackberry patch in 0* weather.  He was so cold he could not get up to nurse and when Eddie found him Mom left to go eat.  Eddie packed him up in the tractor cab and carried him to our cellar.  Twenty four hours and lots of warm towels, heat lamp and propane heater, he was toddling around and taking a bottle.

Prissy was delivered to the main house the next morning covered in ice and snow and barely alive.  I didn’t make it to work that day because of the snow and ice and I think Eddie was glad to have me there.  He found Prissy covered in four inches of ice and then snow.  Beside her, the mom was cleaning and trying to make her dead twin come back to life.  Eddie scraped off the snow and loaded her in the tractor and brought her to me.  I got out an old cutter quilt and he laid her by the woodstove. I grabbed old towels and blankets and started drying her off.  Sassy helped by licking her face.  I was certain she would die because her tongue was cold and she was so lifeless.  Sassy and I worked on her all morning, shifting her from side to side and warming another old quilt to lay over her.  We gave her about an ounce of warm milk every hour or so trying to get her warm on the inside and the outside.  Around 9:00 p.m. she started trying to get up on her own and by 10:00 she had taken three ounces so we decided to move her to the cellar with George.

Thankfully both calves are doing well.  George has been a little rough on Prissy and stepped on her the first night they were together and she limps from her left front leg but we’re hoping time and some loving care will fix that.  She’s a lot smaller than he is coming in at around 45-50 pounds and Eddie says George weighs over 75 pounds.

Here’s some more pics of them from the last two weeks and I’ll update their growth and shenanigans as time goes on.

Prissy is trying to making friends with Cuddles, the cat. 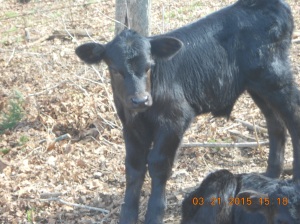 George has a voracious appetite, funny, big kicker, and is constantly sucking on Prissy’s ears.

Prissy is watching the chickens. George usually chases them.

Prissy and George enjoying the sunshine.

George climbing out of his hutch and Prissy wondering “why?”

It’s not as easy as it looks when there’s only one person feeding them.

George tries to take Prissy’s bottle when he empty’s his first!

Just to let you know how I feed them, we buy powdered calf milk that is medicated and high in protein and feed them two quarts every eight hours.  The powdered milk is mixed with water and the first couple of feedings they are given colostrum to get the immune system going that they couldn’t get from their natural mom.  At three to four weeks, we start introducing them to the small grains.