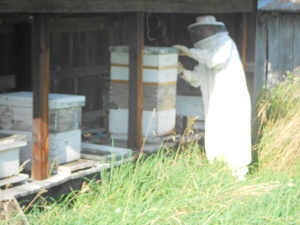 Hubby is checking the supers for production and they’re just not quite capped over but he pulled the ones that were full and replaced them with fresh frames. 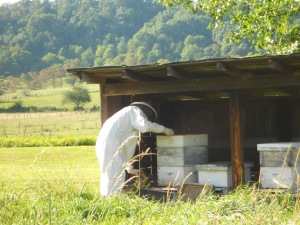 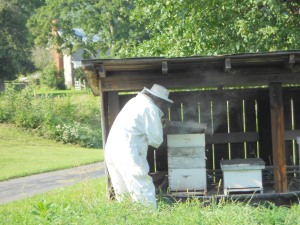 Smoking the hive a little to calm the bees so he can check this hive.  It’s never been real productive but swarmed a lot.  This year he added a brood box and an extra super and they working their little hearts out.  They swarmed one this year about three weeks ago and instead of leaving the farm they went into one of the hives that died last winter.  I guess when they were robbing the old honey out of it they figured it’s a nice new place to bring a new queen.

He loads the supplies on the ATV and moves closer to the hives to work.  It works well and has room to work without bringing the bees back to the garage. 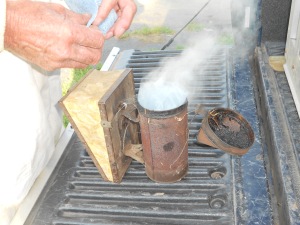 This is the smoker he uses.  It’s old but still does the job.  I save all the worn out jeans and he tears them into strips, uses his lighter to set it on fire and stuffs it in the smoker and pumps the bellows to get it going good. 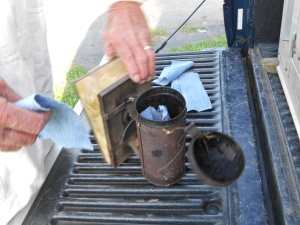 This fine, soft bristled brush is used to gently sweep the bees off the frames after removing from the hive.  Sometimes the bees are persistent about hanging on but soon leave for the hive. 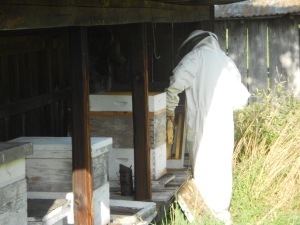 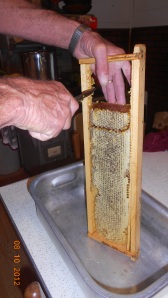 Now you’ll see how he prepares the frames for replacing in the supers.  The bees could make their own starter comb but this way it’s set in straight and they work from that foundation to make the smooth honey he cuts from the frame. 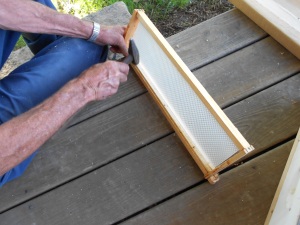 Tapping in the small strip that holds the comb straight.

He took honey out of the supers a couple weeks ago and then took some more this week.  Most of the flowering they use this time of year makes darker honey.  We like the lighter, sweeter honey so he takes off what we want to use and sale now before they add the dark nectar to the frames.  We have mostly quarts right now of honey with comb and a few pints of strained honey.  I’m still cleaning up wax all over the kitchen.   We sell the quart with comb for $9.00 and the quart strained for $14.00.  The pints with comb are $7.00 and the pint strained is $9.50.  We lost five hives last winter and honey is in short supply and we had to raise the price this year to restock the frames and comb.  The supplies are so expensive but the end result is awesome!! 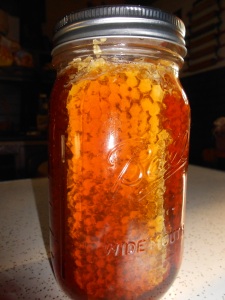 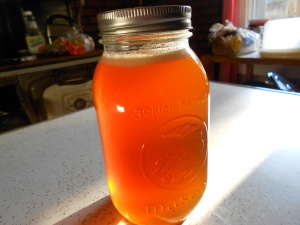 We lost five hives of bees last winter and were very skeptical about having any honey this year.  Hubby has checked the hives frequently and has taken one honey super off and two frames from one other super.  The frames left are full but not capped yet.  Normally we have several swarms each spring but this year we’ve only had one.  The bees that swarmed took over a hive that the bees died in last year.  Hubby has doubled the hive body in hopes of making them stronger and able to store more honey for their winter survival.

He’ll take the supers off in another month so that the bees will prepare their hives for winter.  The honey he has taken off is still in the supers at the moment because he has so much other stuff to do and he’s waiting on the frames left to get capped.  We don’t have a lot of bloom for them to work now except for white and red clover which makes gorgeous, sweet honey.  They are also working on the Queen Anne’s lace, yarrow and wild daisies in the fields.  The bee’s were very happy with the sourwood and chestnut bloom a month ago also.

The jars are ready for the honey and hubby has been cleaning up some more frames to place in the supers when he takes out the capped honey.  The bee’s will work to fill it and he’ll leave it for them to feed off of until he takes the supers off for the winter.

Making sure the comb is just so in the frame and will be easy to remove later. Sometimes the comb will buckle or twist and the bees will make a mess filling the comb.

Tapping in the small strip that holds the comb straight.

He will sell most of the honey but I’ve asked for three quarts to stay in my kitchen.  I use it to bake my bread and sweeten any dishes that call for sugar.  I love honey on a hot biscuit or in a hot cup of tea!