You would think that I have enough to do on the farm but alas NO!!  I have a friend that had a big flock of ducks and she had been giving me her duck eggs because they don’t eat them. They butchered most of their flock and asked me if I wanted the what was left over. 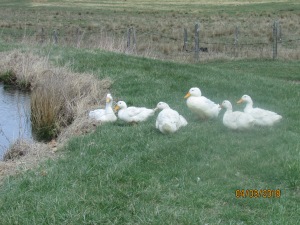 I got seven full-grown ducks from Nikki & Eddie Garey and I appreciate them so much.

I got two drakes and five hens and what a beautiful addition to our farm animals.  It only took one day for them to get use to their new owners and home.    They’re very easy to tend to, all I do is put out feed which is usually whole corn and maybe some leftover biscuits crumbled up for them.  They get water from the pond and in the winter I will keep a trough of warm water out for them to drink.  They don’t like being cooped up, so they’re free to range the farm as they wish!

I’m very lucky to have them because I love to bake with duck eggs and they are awesome when making French toast, cakes and pies.

I’ll be making lots of beautiful and mouth-watering pound cakes for hubby.

Last night I made two egg custard pies, my favorite! The duck eggs helped to fill the deep dish pie crust up to the rim!!  I am getting two eggs a day now and will be using the next ones for making my loaf bread and rolls.

From left to right, duck egg, white chicken egg and brown chicken eggs. Most all of my chicken eggs would be considered large if bought in a grocery store.

This is the last carton of beautiful duck eggs given to me and I stuck a brown chicken egg in the carton to show the difference in size. 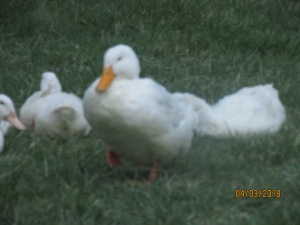 These are American Pekin Ducks and the Pekin duck is a domesticated duck used primarily for egg and meat production. We will have them for their egg production and beauty on our pond. 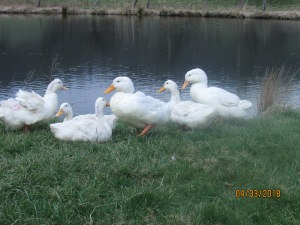 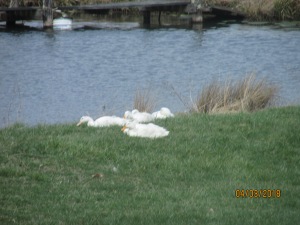 They’re resting now after a good swim and cleaning. I think they’re one of the best birds at cleaning and oiling themselves, especially after a run through the garden. They come out with their breasts brown and yucky and just a few minutes in the pond and they’re snow-white!

Please forgive my silence. Between the garden, animals and the issues unforeseen, I’ve just been inundated with work and only open the computer a couple times a week.

The garden is full!!! With so much rain this summer, our pantry is running over.

Our granddaughter graduated from high school in June and starts college in a couple weeks.  Where has the time gone!!!

On top of that we have a brand new grandson born three months early and he’s in New Jersey (450+ miles from Virginia). He’s in a neonatal unit at Children’s Hospital in New Jersey. His mother had some major health issues which caused toxemia and the baby had to be delivered early on July 8th. He weighed 2 pounds and 2 ounces and 14 inches long. He’s a little fighter and gained some weight and now weighs 3 pounds and 15 inches long. Declan Bryant is his name. He’s having some serious issues this week and the little guy is exhausted. Shawn, our son, is in New Jersey this weekend to see him for the second time and he’s keeping us updated.

Shawn’s first visit with his son.

I’ve been canning and freezing green beans, broccoli, cabbage, pickles, squash, apples, rhubarb and Eddie told me last night that I’ll have more beans in the coming week and corn after that. We’ve pulled the onions and waiting on the brussel sprouts. We have a crock of kraut fermenting now and hope it’ll be ready before anything else comes in. 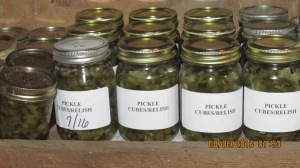 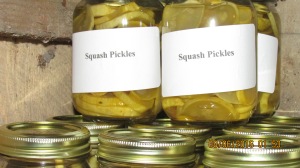 Green beans and we’re not done yet!!! I think we’ll sell the ones coming in now.

I’ve taken on two part-time jobs working on websites for two sisters and working away from the house on one of them 2-3 days a week. The other one I do from home. It’s a little extra spending money. Our big yardsale/estate sale was for one day and we cleaned out one house on the farm and made around $2500.00. I’m in the process of filling it up again from the other buildings and we may have one more sale next spring just to get rid of it all.

This is enough news for now but will catch up again later. I haven’t touched my blog in some time but haven’t given up on it.

One more bit of news, neighborhood dogs that aren’t watched after cleaned out our duck population in one night back in June, I think, and another one got in my chickens this week. I’m down to 21 hens and two roosters at this point.

This is just a quick catch up and I’ll hopefully be back soon! Love you my friends and want to ask you all to keep our grandson and son in your prayers.

We’ve added stock of a different kind on the farm that we’ve not had here in a long time or never.
First to arrive were two Swedish Black ducks that were supposed to be mallard ducks. Our granddaughter fell in love with them right off at Tractor Supply.

Pablo and Gwen were Victoria’s first real farm animals, I believe. She’ll correct me if I am wrong.  They’re laying on her butt while she’s reading a book at our house.

Like all babies they grow so fast and boy did they! 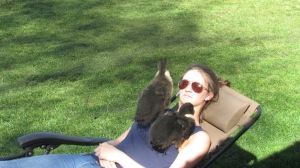 But they were still captivated by their mommie!! Wherever she went they went and she took them for walks every day.

Victoria’s boyfriend, Cody, built them a nice hutch which we kept close to the pond but had it shielded from predators. 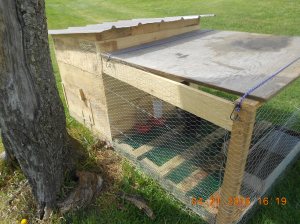 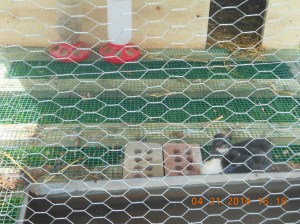 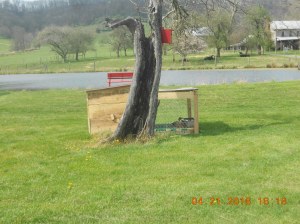 Hutch with shade and close to the pond. 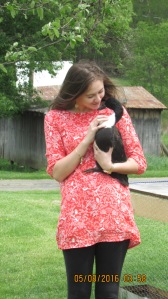 Papa told her they weren’t mallard ducks and she did the research to find out what kind of duck they were.  In the meantime and while she thought they were mallard ducks, Papa told her that mallard ducks would migrate in the fall unless they grew up with domestic ducks.  She was devastated and talked him into letting her have a couple white ducks to grow up with and he relented.  She came home with seven white ducklings.  Pablo and Gwen were jealous and soon taught them they were the head-honchos on this farm!! 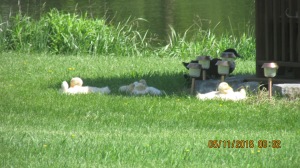 Here’s the gaggle of ducks (or is that for geese?)!  We also inherited another duck from a lady that got one for Easter and kept it in her home (after full-grown) and finally decided a full-grown duck did not belong in the house.  Her name is Fiona and she is full-grown compared to these and they all live happily together on the pond.

Then we decided to raise rabbits and I bought two female lops from a friend of ours and a un-related buck.  We’ve had them since the first week of April and they were bred a few days before I picked them up.

This is our buck, Sebastian!

On May 8th, Cleome had three little ones but one did not make it. It was a three weeks before Marigold introduced her little ones to me and we thought she had seven but today after weaning them from their mama’s we found out she had eight.  They are all now in their big playpen together and giving mom’s a much needed rest so they can gain back some weight and grown their beautiful coats back.  Here are the two litters combined and they have been eating fresh grass, rabbit grain, apples and carrots for a week now.

The hutch has an enclosed room with hay for them to eat or stay warm in.

We have two solid black ones.

They have plenty of feed and I pull grass for them three times a day and more if they eat it up.

There only two that look-alike and they’re both solid black. 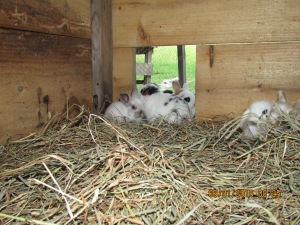 They really seem to like their new nest and have been playing and running all afternoon.

I can’t tell if this little solid white one is enjoying his new nest or if he’s eating his nest but it is content!

One of the white ones have black dots on both eyes and one has a black streak down it’s back.

This shows their play area and where they eat and get their water. I need to get them a couple salt blocks since the weather is heating up. They’re hutch gets more shade than their mother’s hutches. 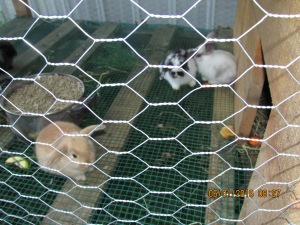 So, we have 10 ducks, 13 rabbits, 29 chickens and about 75 head of cows and calves on the farm currently.  Today one of my older hens decided to go broody and set so I foresee baby chicks in a few weeks to add to the menagerie!