Hubby is getting pretty good trapping with snares and this second male coyote was caught Tuesday morning in the field with the cattle. Since catching the other one last week we had been hearing another in the same area. Sadie barks all night when they’re around and howling and her hair stands on end when she hears them. The pack is dwindling but no females yet even though we know they’re around. Now that bear chase season is over, Mr. will be setting more snares, he doesn’t like catching hunters dogs in these traps and we alert our neighbors that traps are set so we don’t catch their dogs.

Well the aggravating coyotes are terrorizing our livestock again.

Please don’t give us grief for killing the beast. When we’re trying so hard to make a living these day with our cattle, we do everything possible to save the calves born and then stolen away by these vicious animals.

Our area is full of them and they keep our dogs upset night and day but we don’t dare let them out to protect because a pack or even a large male coyote would tear our dogs to bits.

We had a professional hunter come in to hunt them but with no luck! These animals are so alert to the sounds the callers make and won’t come near them, so he was not successful in seeing or hearing them. This is why we and neighboring farms set snares for them.

We have heard in recent nights, three – four different packs in our area. There is no bounty and the wildlife officers are too busy with hunting violations to give any assistance so we do what we can on our own.

I’ve said in the past how much I detest and despise coyotes.Well, we have almost a month to go for the first spring calf to arrive and nasty beasts are back.  Hubby set snares and has caught two, one young male and this huge male that’s probably two – three years old.

If there’s males around there’s bound to be females and their mating season will soon begin if not already.  This brute could take a newborn calf away from it’s mother in a matter of seconds.  A month old calf in a few minutes if it’s not with the herd.  Of course, these cows always decide to calve out in the woods alone and the babies are then easy prey, especially with canines like these: 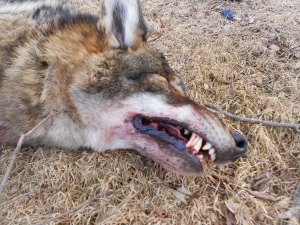 There’s open season on them and several trappers are trying to help but Mother Nature gives them the inate sense to breed larger welps when the group get’s killed out or dies out.  We’ve lost too many babies to these predators and stopping them is essential to our farm profits each and every year. 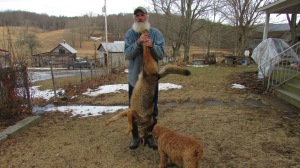 Not only do they kill the calves but they devastate the deer population, all livestock and will kill your pets. 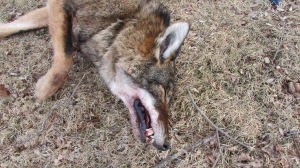 I hope I don’t offend anyone with this post but everyone needs to be aware of the problems this creature creates for farmers.