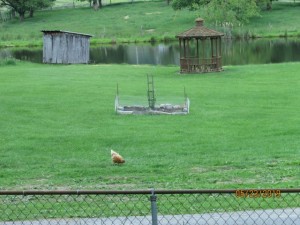 This is my newest flowerbed. It’s located between the house and the gazebo. I took with Eddie’s help all of the large chimney rock that bordered my beds in the house yard and placed them in a large rectangle in the middle of the big yard. It’s a work in progress. 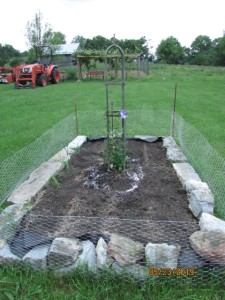 The bed at the moment only has one plant in it and that’s a clematis that wasn’t getting enough sun around my porch. I placed a growing arbor in the middle for it to grow on. We stretched chicken wire around it to keep the free range chickens out of it.

I plan to add more growing medium in it before major planting next spring. I need to find some more chimney rock to build it up a bit and it’ll need about 12 large bags of MiracleGro potting mix added to it.

It’s rather dwarfed looking now but once its full of sun loving perennials it’ll be a show place, I hope! I think I want to go up one more layer of stone before adding to it. I’ll work on a plan for the plants this winter when updating my gardening journal.

The gazebo is another garden I’m working on.

I cleaned out all the stone and dug out all of the trumpet vine. This vine was too overwhelming and was growing out the roof. 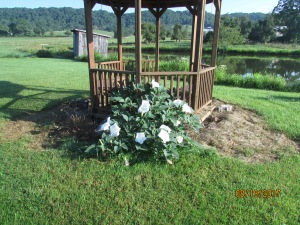 These were the moonflowers last summer. Can you imagine them all around the gazebo!!

Up close view of the bloom that blooms all summer.