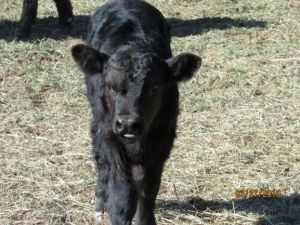 This is Trouble. Biggest bull calf ever raised on the farm. He was born to a black Angus heifer which means it was her first ever calf. We don’t like for our heifers to have large calves but apparently she was fed well which helped him grow. The sire was a two-year old Angus with small head and shoulders. Can’t imagine what he will look like fully grown or his son!! 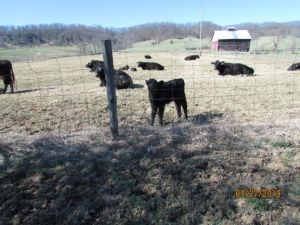 His mom was in labor for five hours and I was alone on the farm with her. I tried several times to get close to her to help by pulling the calf but she would have nothing to do with it. Finally when Eddie got home from a doctor’s appointment she was tired enough to lay still and he pulled the calf. Immediately she got up and walked away having nothing to do with the pain she had been in. 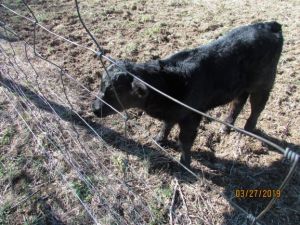 Of course, he was also born on a very cold and wet day and was covered with mud. The other heifer mothers came to the rescue and cleaned him up while Eddie got a bottle of milk to warm his insides. 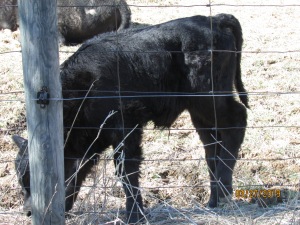 His mother finally came back to him the next morning but would never let him nurse. She was and is protective of him but would not let him eat. Trouble is now a bottle baby and doing really well. 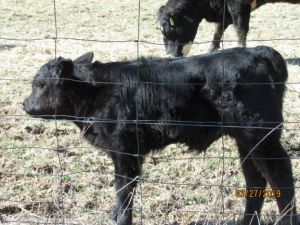 He was born on March 4th and instead of one month old he looks like a three-month old spring calf. Unlike most bottle fed babies he is not pot-gutted, he’s very strong and doesn’t play with the other calves though they try really hard to get him in on the racing they do each day!!

We’ve not decided if he will possibly become a sire on the farm but he definitely looks and acts like a full-grown young bull!