Hubby and I had a quick window of time to collect our sap this year and it turned out perfect!  We decided to make the syrup by ourselves this year because of the unpredictable spring weather.  We also decided that about half a batch would suffice so we only filled the sap tank with 135 gallons of clear maple sap!

Brick firepit before pan is placed.

The cleaned pan before and after. 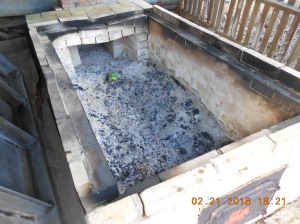 Pit of ashes after all is completed and the cleanup is done.

These are the scoops we use to move sap from one section of the pan to another. 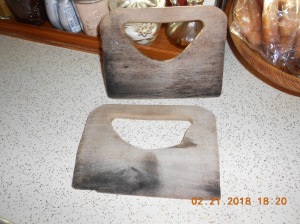 This is the paddles we use to scrape the foam off the cooking sap!! They’re handmade by one of Eddie’s ancestors but we’re not sure which one. 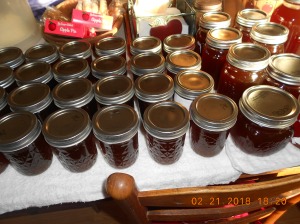 Pancakes and french toast will be on the breakfast menu for a while!! 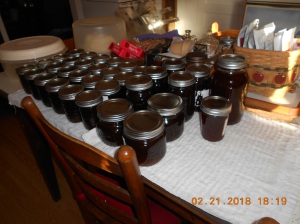 When the sap goes in the pans it’s clear as water and the longer it cooks the more golden it becomes.

This is a gallon bucket we use to dip the paddles in after dipping the foam from the sap. 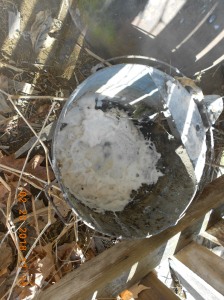 This is the foam that builds up while the sap is boiling. We have two paddles on hand to dip it off the hot sap. If left on it will leave a crusty top on the sap and we don’t like that.

Of course we have entertainment as hubby hooks up a jambox on the rockwall above the cellar!!

It was an absolutely gorgous day and a spectacular blue sky stayed with us the entire day.

Early morning at the sugar house!

The only equipment in the sugar house is the firepit and the pan over for cooking down the syrup. We do have a 1/2 gallon scoop that we use to move the syrup from one section to the other. 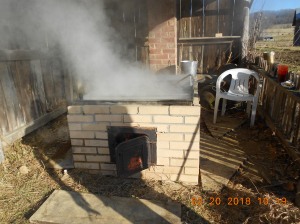 Front view of the sugar house which is open on two sides to allow the steam to roll out!! 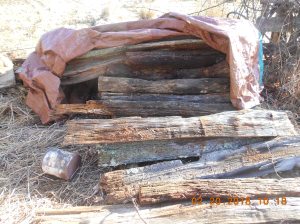 We save old fence posts just for the cookoff. They’re locust post and locust rails that are perfect for this special event!

We hook a water hose to the tank which is on the back of our Dodge pickup and park it on the driveway above the sugarhouse and let it gravity feed to the pan. It has a cut off so that we can cut it off when the pans are full. This saves us from carrying milkcans up and down the path.

The pan has four sections that we keep full at all times. The first two are wider than the last two and there is a slot opening that the sap flows through to keep the cooking at an even level. The third section of the pan is where the first thickening really starts to show and the smallest section holds about 3-4 gallons of sap and is the final thickening pan. As we work down the sap the pans stay full and when we run out of sap we start filling them with water to keep the pans from the scorching because the fire in the pit has to continue to stay hot and boiling. 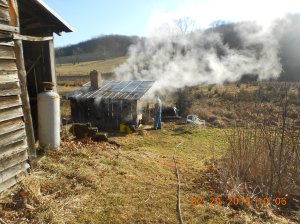 The sugar house firepit was blazing and the steam coming off the pan was heavenly. Nothing like a good steam bath to open the pores!!

This is our holding tank that the sap is stored in during the tapping season. It holds 275 gallons but we downsized this year.

We only tapped seven trees that were in our yard and around the sugar house this year. 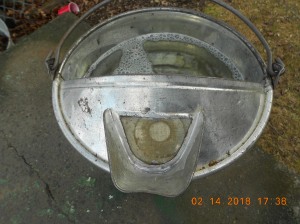 Closeup of the straining screen on the bucket. 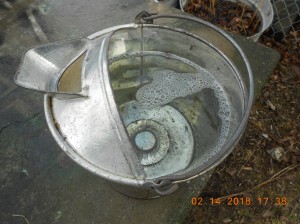 Metal strainer bucket for straining at the trees when we gather and again before putting it in the holding tank.  Some of this is out of sequence but I think you’ll get the gist of it.  We had a wonderful day and my youngest aunt and uncle came and spent the day with us.  They had never seen the process and seemed to enjoy the day!  This was the first year that our kids weren’t involved but they had to work and the weather situation would not allow us to put it off!!