The chickens needed a new home due to the age of their existing house!  It leaked like a sieve.  Critters were getting in no matter what we did and killed eleven of my new chicks that were under two months of age.  The hill I walked to get to it was becoming a hazard for me in the winter months.  We moved the chickens (they were not happy at first) into a cinder block building which has electricity and water and a separate room for their feed. 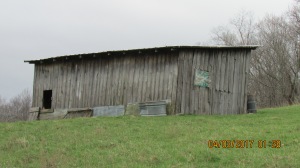 Old Chicken house is made mainly of wormy chestnut. When we started tearing it down we were able to save some better boards. 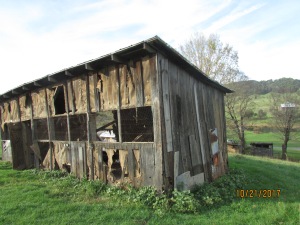 After two weeks of tearing off boards when we had an hour to spare, it’s starting to look like a spooky shell!!

As we tore off the outsides, everything was thrown to the inside of the shell to burn.

The only parts of the building that weren’t wormy chestnut were oak and pine replacements over the years. 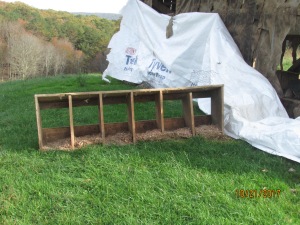 Next we cut the main support beams on the interior and wrapped a chain around them which was attached to the tractor and started pulling it down.

Amazingly the roof fell straight down on to the interior debris. 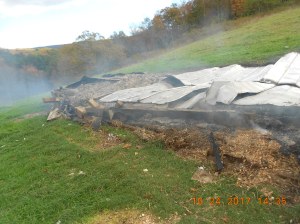 Within two hours the fire was almost finished except for some large beams that served as ground support. It took two days for the smoke to dissapate and then it was time to pile up the tin roof and dispose of it.

Now the chickens use the remaining area as a dusting bath!  Next spring I’ll spread it out a bit and start a new area for gardening.

4 thoughts on “Down with the Old”