Every year our pond becomes invaded by snapping turtles that eat the fish and frogs from the ponds. A few weeks ago we found where some varmint had found several turtle egg nests on the farm on the side of a mountain spring that runs through the farm to Sinking Creek.

Dirt bank along side the branch where the turtles had climbed, dug perfect holes, laid their golf-ball-sized eggs and covered them to hatch. 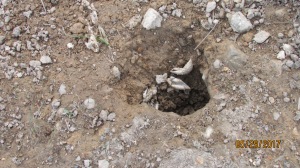 We think this was probably done by a coon, skunk or even a raven or two.  Every nest, and we counted at least six had been raided and what eggs were left will not hatch. 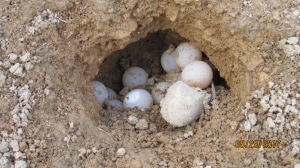 You can see the shells along the side of the hole and below it.

But with that being said we don’t like having them in our pond so we set “trot lines”  (heavy nylon thread with a huge hook on the end ) to catch the beast that eat our frogs and fish.  We caught one night before last and our dinner that night was chicken fried turtle. fried potatoes, cantaloupe and asparagus.  So good!!!

Fried turtle is so good!! 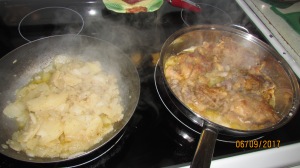 Fried potatoes and onions on the left and fried turtle on the right.