Our biggest sap producer in the back yard of the mansion.

It’s getting close to time to make maple syrup again and Mother Nature split our best sap producer in half back in late summer.  The tree is over 200 years old and we have pictures of my husband’s family having a picture made at it when his great, great grandparents had passed away.  All of the children were standing/sitting in front of the tree when the picture was taken and the tree was only about 10-12 inches around.

This is a picture of my husbands great aunts and uncles taken at the mansion and the young maple can be seen in the background.

Now, three to four people holding hands around it can still barely reach around the base of what’s left of it.  I’m hoping it may sprout new growth this spring and only time will tell.  We got several truckloads of firewood from it and the rotted was carried to the woods to go back into the earth.  This loss will make a big difference in our sap production but we do have several of the same size on the farm that we have not tapped before and will during our next production season.  We probably won’t have a maple syrup weekend this year due to the crazy season we’re having this winter/spring.  Here’s some pictures of the downed tree and the damage it did to fence and gates but thankfully fell to the north instead of on the mansion (family home of our ancestors). 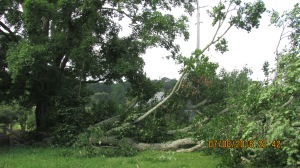 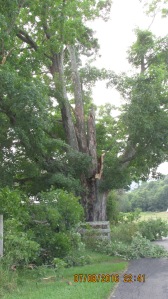 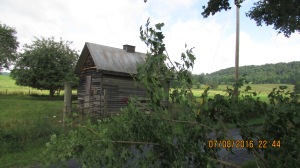 That storm in July broke another of our heritage apple trees which seems to happen with every storm.

We had another storm last night but thankfully no damage was found but for one huge pine tree in our back fields.  Cattle and fences were spared this time.

Completion of the King-size Sampler QuiltDecember 31, 2021
4 months to go.