I went to visit Dean last weekend and we did our usual trips.  He loves to go to the car wash and my car needed a little cleaning. 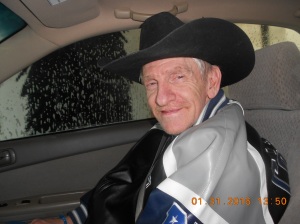 He loves it when the washer hits the windshield and the side glass.

I’ve tried to coax him into rolling down his window but he won’t have anything to do with it.

This trip I was concerned about where we would eat.  He just had the last of his teeth pulled but he proved nothing would keep him from his bacon cheeseburger and french fries, it just took a little longer.

All of his teeth had to be pulled because of the disease in them and the exposed nerves.  I’m told that in the next couple weeks he’ll have the impressions for the dentures made.  The next big challenge will be getting him to wear them all the time.  His doctors also think removing the bad teeth may improve some of his other health issues.

I was told on Monday that he will be participating in a fashion show that the Allegheny Regional Community Services will sponsor and Dean has agreed to escort his girlfriend in the show as long as he can wear “western attire”.  This means finding a fringed western jacket and black khaki pants.  He also wants a dressier new cowboy hat for the occasion.  This is going to be a formal fashion show and he will be strutting his stuff in March.

I plan to visit him this weekend again if it’s not too frigid outside!!

8 thoughts on “Visit With Younger Brother”

Completion of the King-size Sampler QuiltDecember 31, 2021
4 months to go.