Friday night a week ago hubby accepted an invitation to go Striper Fishing with a friend of ours.  They left around 8:00 p.m. and headed for the lake and caught these beauties before the rain storm ran them off the lake. 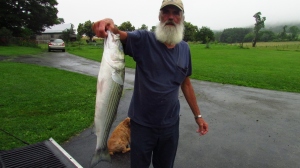 The biggest one weighed a little over ten pounds and the other two were just a little less.  Vince caught two and Eddie caught one but Vince had been fishing for them all summer and had enough in his freezer to them for the winter.

The next day Eddie took them to his “professional” fileter and this is what we got.

The first night i took 1/2 a filet, cut in 3″ squares and soaked them in salt water for about 30 minutes.  Then I poured a package of cornmeal muffin mix in a ziploc bag, poured about 1/4 cup of Old Bay seasoning in the muffin mix, sealed it and shook like crazy to mix it all really well.  Then I melted a stick of butter in a skillet and melted it to sizzling but not burning.  I poured the salted water off the filets and dropped each in the cornmeal mixture, zipped up the bag and shook to cover completed.  I let it set just for a second then shook again and popped them in the sizzling butter.  When golden brown on the bottom, I flipped the pieces and started sizzling again.  I tuned them about three times and then took out and placed on a paper towel covered platter. I served this with baked beans, coleslaw and a baked potato.  Best fish I’ve made in a long time.  The next day hubby fixed the same meal but instead of skillet he used the new deep fryer I bought him for Father’s Day and it was absolutely DIVINE!!!

We froze the rest of the filets for future dinners and Heather got a few on Tuesday when she came to visit.