I hope you will remember previous posts I’ve written about my younger brother.  He now lives in a wonderful Intermediate Care Facility near by and I see him twice a month and sometimes more often.  I love him dearly and he makes me smile, most of the time.

I promised him back in the summer that I would take him on a trip to meet up with his old girlfriend  that lives in another town about an hour away from where he is now.  It has been 15+ years since they had seen each other.  They send cards and letters to each other but had no way of seeing each other. My brother is not a big talker on the phone so they didn’t call each other either.

Right after Christmas I had a two full weeks off and set up a date for them two of them to have lunch together and go to a mall.  I called her sister to see if everything could be arranged.  Her sister does not drive so we couldn’t meet half way but I picked Dean up at 10:00 a.m. and we drove to her house to pick up her and the sister.  I took them all to Applebee’s for lunch at one of the local malls.  On the way to lunch they sit in the back seat of my car holding hands and exchanged Christmas gifts.  The sister and I got quite a kick out of watching and listening to them.  It was as if there had never been 15 years and almost 60 miles between them.  We took lots of pictures, ate and let them order whatever they wanted, and then we went shopping in the mall.  They hit every jewelry counter in the mall and talked about getting married.  They’re so funny.  He bought her a stuffed animal cat and she calls it Dean.  Hope you can see the happiness in their faces! 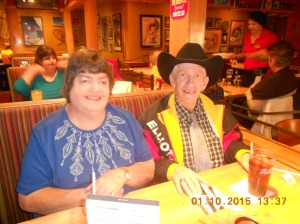 Dean and Judy at Applebees

Applebees is their favorite restaurant

They ordered FOUR desserts and ate it all!!

Ice cream all over his face 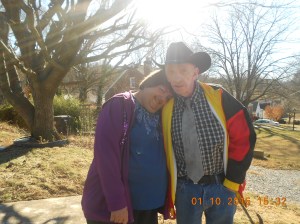 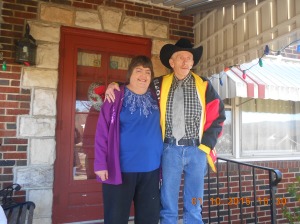 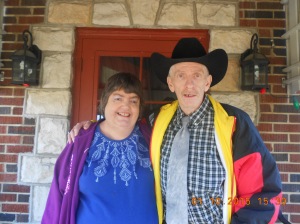 We’ll make sure they get together again in warmer weather!!