He’s on the alert to danger!

This summer we have been overrun with groundhogs.  Normally, these varmints are out in the hayfields or the woods but this summer we’ve got then building their houses under every building on the farm and that’s a lot og groundhogs.  Hubby believes that there’s really not that many more than usual.  He thinks we just see them easier because they have moved out ot the fields and woods due to coyote pressure.  We even had on build a home under and between the apple house and the cellar which has a small garage attached to it.  This year I laid my onions on a board in the dirt floor of the garage  to dry some before hanging them.  The first batch did well and we got them hung but the second batch which was mostly white onions were eaten by the creature and hubby found out before they eat the whole batch.

This is the two pieces of thin plywood that I dry the onions on in the garage.

This is the hole he dug out in the garage for his home. 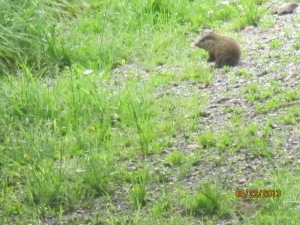 Youngster living under the barn.

Then there were two babies under the barn. We finally saw four kits from that litter.

Alert at all times. 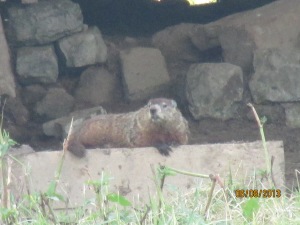 Time to nap in the sun!

They’re  destructive little creatures and will  eat up a garden in a heartbeat!

4 thoughts on “Groundhogs are taking over!”