It’s amazing to me that anyone may be short on hay this winter since we had such a great season.  But then I think about the drought the rest of the country had and still has and then I understand. We had about 70 round bales left from summer 2011 and met our needs with some to spare this year. We started feeding out the older hay first and when the snows come hubby puts a couple in each patch of woods that the cattle are in and feeds the good hay first thing in the morning. The cattle move from the fresh to the older as the weather turns bad. The calves like playing and nibbling in the older hay too. Our cattle are in good shape and the fall calving is complete now since the end of November.  Our spring calves will come in late March, early April through May.

One of three haylots full of round bales.

My older hens have quit laying but I also raised late chicks in June and they’ve started laying for me. I guess it’s a type of rotation laying in our henhouse. I never use heat lamps or special lighting because I think they need a rest too. I make sure they get a tablespoon of vinegar in their fresh water each morning, lots of grit in one feeder, and cracked corn to put on some fat on their bodies which will help them make it through the winter. The vinegar helps rid them of worms, I’m told and they seem to be in better shape since I started using the apple cider vinegar.  I don’t let them out of the henhouse when there’s snow/ice on the ground.   The biggest problem I have is the younger hens want to sleep in the nests at night because the older hens (pecking order) run them off the roost. Hubby fixed that by building an additional roosting section to the existing roost and all but one hen now uses the roost. She tends to make a nasty mess in the nests during the night and by the time I get to the hen house in the morning another hen has laid her eggs in the mess. I have 38 chickens of which three are young roosters. I’m only getting 6-8 eggs a day now but it’s more than enough for us to use and share with the kids as they visit.  I have about 10 hens that need to be culled but I find it hard to let them go because when I enter the henhouse some of them come to me singing and of course, I sing back to them.  I always have a couple hens that get broody and hatch but you never where the hatch will be roosters or hens.  I think this spring I”ll order a new batch of  Buff Orpingtons and Americauna’s.  I love those beautful eggs.  Two of the three roosters I have are Americauna and the other is a mix but he is a beauty.

New roost addition to accomdate everyone! 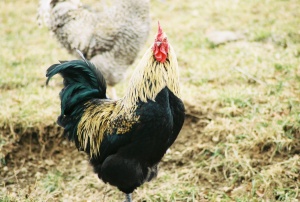 King of the Roost

He’s a little over a year old but his sisters are giving me double yolk brown eggs.  I haven’t found an adequate name for him yet but thinking about it!