On the 29th of September, Virginia had it annual Youth Hunting Day for deer.  This was my granddaughters second year, I think, participating and she went with her grandfather to her mother’s deer stand.  She likes hunting in the afternoon like her Nana and this year she waited about two hours before the opportunity showed itself.  Two bucks came out of the woods into the clearing in front of her stand.  One was very small and the other looked like a monster to her.  She put up her gun and whispered to Papa that she could here her heart beating.  She  sighted in and click . . .  the gun didn’t fire.  Apparently when they got to the stand, Papa loaded the gun but did it gently and quietly so as not to scare anything off  or alert the game to their location.  The gun apparently didn’t load completely and therefore would not go off.  He quickly took it from her and reloaded, the deer looked in their direction but didn’t run because they were well hidden.  Victoria took the gun, sighted in again and shot.  The big  buck fell immediately and the smaller ran off, safe for another day.   She and Papa sat quietly for about five minutes, put the gun on safety and exited the stand.  They started walking up the hill toward the direction the deer fell.

I was watching the entire scene from our front porch and about 500 – 600 yards away with the field glasses. When the deer fell it went in a small dip in the landscape and while they were walking up the hill they could not see it and Victoria was getting nervous.  She thought the deer had got up and ran off which would mean tracking.  Once they got within 10 feet of the kill location they could see the horns sticking up and everyone was very happy.  Papa went to get the truck while she guarded her trophy and calmed down.   When he got back to the kill sight, Victoria got up in the truck to hoist the head and horns while Papa lifted the main weight of the deer.  Papa says Victoria needs to work on her upper body and arm strength because she almost came out of the truck but they finally got it loaded and headed for the house.

I met them at the truck and here are some photos we took once they got it home: 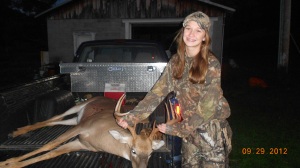 She was very anxious to get to church the next day to show the pictures to her pastor and all of her male friends that hunt.  She was a little put out when they shunned her and didn’t want to talk about how their hunts went.    We told her not to worry about them and to be very thankful that she was able to help fill the freezer.  I’ve also attached some photos that her Mom and I took the next day in the bright sunshine with her proud Papa. 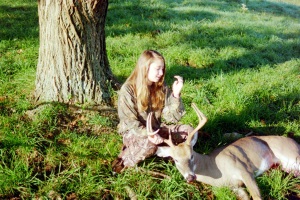 There is some funny parts I can’t leave out of this post.  When I was taking pictures of her at the truck when they first bought the deer in Victoria realized that what she and Papa thought was an 8-pointer turned out to be a nine-pointer which made her unbelievably happy.  The other funny part is, Mom has banned her from her stand and told her if she can do that well she can hunt on another acre of the farm.  Now in order to be able to live with this 14 year old, going on 15, we all must hunt harder and better!!  Victoria is a very competitive hunter as you may have read in some of my spring posts when she was turkey hunting with Papa. 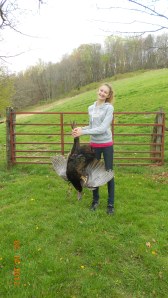